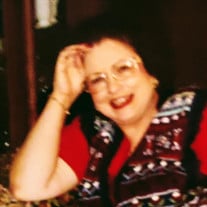 Johnny Elizabeth Shackelford was born on August 5, 1938, in McKinney, Texas, to Rev. Joseph and Thelma O'Neal. Her family was very transient during her childhood, and they lived in Brownwood, Deep Ellum, Leander, and Crest before settling in Cotton Center, Texas in 1957. In May of 1958, shortly after her graduation from Cotton Center High School, she went on a blind date with a man who would be the love of her life, James F. Shackelford. They married just three months later, on August 25, of 1958. On February 8th, 1960, they welcome their first daughter, Camilla. They would welcome their second daughter, Melissa, on August 6th, 1966, while living in Dumas, Texas. Freddie's job relocated the family to Liberal, Kansas, in 1976, where they remain until his job brought him back to Amarillo, Texas, in 1993. They moved to their present home in Lewisville, Texas, in March of 2005, to be closer to their daughter and grandchildren. Johnny had many hobbies and talents which included crocheting, embroidery, painting, cross stitch, and ceramics. She enjoyed sewing clothes for her herself and her children. She particularly enjoyed cooking large meals for her family, especially on holidays. Johnny was interested in the latest fashion trends and loved to shop. She delighted in dressing up her granddaughters and styling their hair when they were young girls. Johnny and Freddie spent their first years of retirement traveling in their 5th wheel and their dachshunds. Johnny's dogs were some of the best cared for dogs in the world. She also was a collector, and possessed an impressive collection of milk grass, dishes, and gnome figurines. Whether she was happy or under the weather , she was always singing, most often a hymn. Johnny arrived in Heaven on February 12, 2019. She is proceeded in death by her parents, Rev. Joe and Thelma O'Neal, and her brother Joseph O'Neal Jr. She is survived by her husband of sixty years, Freddie Shackelford. Her daughter, Camilla Mudry, and her husband, David Mudry. Her daughter, Melissa Ailts, and her husband, Rick Ailts. Her granddaughter, Courtney Seale, and her husband, Doug Seale. Her granddaughter, Whitney Mudry, and her fiancé', David Gilligan. Her grandson, James Mudry. Her great-grandchildren, Ethan, Davin, and Claire Seale. And her sister, Sharon Mearse Davis. She is also survived and loved by numerous nieces, nephews, and cousins. In lieu of flowers can be made to Samaritans Purse or the Gideons.

Johnny Elizabeth Shackelford was born on August 5, 1938, in McKinney, Texas, to Rev. Joseph and Thelma O'Neal. Her family was very transient during her childhood, and they lived in Brownwood, Deep Ellum, Leander, and Crest before settling... View Obituary & Service Information

The family of Johnny E. Shackelford created this Life Tributes page to make it easy to share your memories.

Johnny Elizabeth Shackelford was born on August 5, 1938, in McKinney,...

Send flowers to the Shackelford family.