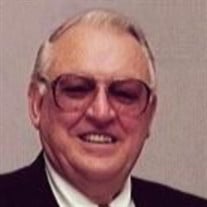 On Wednesday, February 17th, 2021. Lee Hopkins passed away peacefully at home after an extended illness. Lee was born in Tillamook, Oregon on February 14, 1928 to Willie L. and Della May (Solmon) Hopkins. Lee attributed his direction in life to two people. Mrs. Scythe, a teacher, who encouraged him to leave the dairy farm and to go accomplish greater things with his life and Della Hopkins, his mother, who helped him realize his first milestone by becoming a graduate of Northwest Nazarene University. After completing college, Lee entered the ministry and moved to Seward, Alaska where he built and pastored the Seward Church of the Nazarene. A severe illness forced his return to Portland for Medical treatment. Once he was able, he returned to pastoring churches in Marsing and Boise, Idaho, and in 1963 built the McCall Idaho Church of the Nazarene. For a number of years, he served as an evangelist for the Church of the Nazarene. In later years, a dear friend from the Marsing Church introduced him to someone who would become a life-long friend and was a broker in the stock market. Lee made a tough decision to leave the ministry to become a stockbroker. Asked how he explained that decision he would say, "I just went from selling long-term securities to short-term securities." In 2001, Lee and wife, Lerta, moved to Arlington, Texas to live with their daughter Sharon and to be close to his other daughter, Shirley, his granddaughter, Tamme and all of his great grandchildren. Lee loved life, family, and friends. He celebrated each with full enthusiasm and with gusto. Most importantly, he served Jesus Christ daily, speaking often of the miracles, protection and love that God had bestowed upon him throughout his life. He never feared death and showed it as he peacefully closed his eyes and went home. In life and death, Lee is a hero and leaves a huge void. But even greater, he serves as an example of the power of God when Jesus actively participates in and is allowed to orchestrate one's life. Leanold was preceded in death by his father and mother, Willie L and Della May (Solmon) Hopkins, sisters, LaNona Hopkins-Zillig, and Martha J Hopkins and brothers, Glenn Hopkins and Lorenzo Hopkins. He is survived by wife, Lerta J Hopkins, daughters, Sharon L Hopkins and Shirley L Beachler, granddaughter, Tamme A Thornton, grandson, Kevin Thornton, 4 great grandchildren, 2 great great grandchildren. Lee requested no services.

On Wednesday, February 17th, 2021. Lee Hopkins passed away peacefully at home after an extended illness. Lee was born in Tillamook, Oregon on February 14, 1928 to Willie L. and Della May (Solmon) Hopkins. Lee attributed his direction in life... View Obituary & Service Information

The family of Mr. Leanold "Lee" Hopkins created this Life Tributes page to make it easy to share your memories.

Send flowers to the Hopkins family.