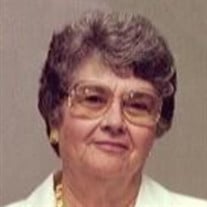 On October 25th, 2021, Lerta went peacefully home to be with her Lord and Savior after an extended illness. Lerta was born in Pierre, South Dakota on January13, 1929 to Earl E and Mable E(Westover) Mosteller. Lerta grew up on a farm outside of Canning, South Dakota during the depression years. She determined early in life that farm living was not for her. At the time, her brother, Earl Mosteller, was pastoring The Church of the Nazarene in Hemlock, Oregon so she went to visit him. Letra met Leanold Hopkins while in Oregon, who eventually became her husband on July 30, 1945. Leanold(Lee) wanted to further his education so moved with Lerta into Vet Ville, a trailer park for married students that were attending Northwest Nazarene College in Nampa, Idaho. There they met fellow students that became lifetime friends. In 1948, Lerta gave birth to daughter, Sharon Hopkins, in Samaritan Hospital, Nampa, currently, the Fine Arts building at Northwest Nazarene University. Lee and Lerta entered the ministry and accepted their first assignment to build and pastor the Church of the Nazarene in Seward Alaska. On August 14th, 1951, daughter Shirley(Hopkins)Beachler was born. During Lee's term there, he became ill and the family returned to Nampa, Idaho. Lerta served as a pastor's wife in the Church of the Nazarene in Marsing, Boise Euclid Associate pastor's wife at College Church in Nampa, Idaho. In 1964, Lerta and Lee build and pastored the Church of the Nazarene in McCall, Idaho. In addition to the ministry work, Lerta enjoyed working for the Dobbs Brothers Auto Dealership, The Nampa Free Press Newspaper, raising two daughters, sewing, knitting, playing piano, singing, traveling, camping, fishing, and hunting. Traveling and adventure were very much woven into their lives. Noteworthy, was the trip to Ecuador to meet Nate Saint's wife, Elizabeth Elliott and meet the Auca Indian tribe that murdered missionary Nate Saint Elliott. In the years that followed, Lee and Lerta moved to Long Beach California and later to the San Francisco Bay area where they launched their retirement. In 2001, Lerta and husband, Leanold, moved to Arlington, Texas to live with their daughter Sharon Hopkins and to be close to their other daughter, Shirley Beachler, granddaughter, Tammie Thornton, grandson, Kevin Thornton, four great grandchildren and her two great great children. Lerta lived her life as a devoted Christian, serving others by the example Jesus Christ portrayed throughout the pages of His word...the Bible. She relished the day when she could be at home with Him forever. Today, she realized her dream and is home with her Lord and Savior, family and friends. Lerta was preceded in death by her husband, Leanold C Hopkins, father and mother, Earl E and Marble E(Westover) Mosteller, sisters, Betty Bradley and Cassel Youngberg, brothers, Earl Mosteller Jr and Lyle Mosteller. She is survived by; daughters, Sharon L Hopkins and Shirley L Be; granddaughter, Tammie A Thornton, grandson, Kevin Thornton, 4 great grandchildren, 2 great great grandchildren. Lerta requested private family services be held only.

On October 25th, 2021, Lerta went peacefully home to be with her Lord and Savior after an extended illness. Lerta was born in Pierre, South Dakota on January13, 1929 to Earl E and Mable E(Westover) Mosteller. Lerta grew up on a farm outside... View Obituary & Service Information

The family of Lerta Jeanne Hopkins created this Life Tributes page to make it easy to share your memories.

Send flowers to the Hopkins family.