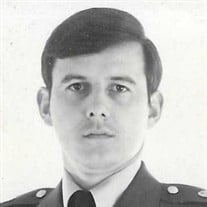 MSG Robert Kenneth "Ken" McQuaig, 73, passed away peacefully surrounded by family at his Euless, Tx home on July 26, 2021, after a lengthy battle with cancer. Ken joined the Army after graduating high School and would go on to serve at numerous duty station along with oversea tours in Korea and Germany. Ken was a Patriot and decorated Army veteran who served 15 years active duty and served another 15 years in the Army National Guard. After retiring from the Army, he worked for the Texas Workforce Commission. Ken was born on July 22, 1948 in Jacksonville, FL to the late Ira William McQuaig, Jr. and Lola Mae Hewitt McQuaig. He graduated from Charlton County High School in Folkston, GA. He loved hunting and was a dog father to many rescued dogs. Throughout his life, he carried on a passionate love affair with ice cream and McRib sandwiches, and firmly believed that yelling at the T.V. helped his football team play better and that dousing every wound in peroxide was a necessary action. Survivors include his wife of 45 years, Terry McQuaig, daughters Tracy Garcia (Michael) of Abilene, Tx, Shannon Walker(Mike) of Blackshear, GA; and Kelley Hennig(Nathan) of Euless, Tx. brothers Gilbert McQuaig(JoAnn) New Port Richey, FL; and Terry McQuaig(Patricia) Jacksonville, FL; and sister Maxine McQuaig Lloyd(Pender) Folkston, grandchildren Jordan Concha, Paul Matthew Concha, Chris Garcia, Michaela Peacock(Trey), Benjamin Concha; Evan Garcia, along with numerous nieces, nephews, and other relatives. In addition to his parents, he was preceded in death by four brothers, Milton McQuaig, Wayne McQuaig, Jeff McQuaig, Marlon McQuaig and grandson Jonathan Blake Walker. There will be a military service held at Dallas Fort Worth National Cemetery. In lieu of flowers, the family asks that donations be made to the American Cancer Society.

MSG Robert Kenneth "Ken" McQuaig, 73, passed away peacefully surrounded by family at his Euless, Tx home on July 26, 2021, after a lengthy battle with cancer. Ken joined the Army after graduating high School and would go on to serve at numerous... View Obituary & Service Information

The family of Mr. Robert McQuaig created this Life Tributes page to make it easy to share your memories.

Send flowers to the McQuaig family.